I will start this blog with something unusual. EMC CX4-120 SPS Battery replacement. PLEASE don’t do this if you do not want to void your warranty. I will not be liable for any damage or injuries that might occur because you did what i am describing here.

I bought a nice EMC CX-120 with 7 Enclosures, Brocade Switches and a bunch of servers in December.

Everything worked great and after some magical password reset I got into the EMC System. This is where i found an error message telling me that the write cache had been disabled due to a bad sps unit. One quick glance at the back side of the sps confirmed the problem. The orange LED “Battery replacement” was lit up.EMC wants the customer to replace the whole SPS Unit, which makes perfectly sense if you are a corporate customer. A regular home user does not own an EMC System. Well i do and i did not want to spend 400 Euro on a replacement SPS. So i decided to open up the SPS Box.

Operation “Lets check it out”

This is actually fairly easy, I only had to remove 4 screws in the front and another 4 in the back of the unit. Once those were out I was able to slide the SPS out of the rack. Unscrewing the 4 screws on the top of the SPS was easy, opening it up a bit harder. I had to use a flat screwdriver to get it open.Surprise! EMC uses regular Lead Acid Battery Packs. 6V 8ah in my case.

They do have the T1 connector which is slightly smaller than the T2 connector on the original batteries. I chose to ignore that.

Left is the new one, right the old one. I went ahead and replaced all the batteries in the SPS one after another. This was a bit of a challenge  due to the fact that four out of five batteries are fixed with some metall brackets which are screwed into the bottom of the unit. Those screws are right under the cabling so getting there was a bit tricky.Once those were gone i went on with replacing the battery packs.

In case you try this make sure that you do not mix up polarity of the cableing.

All done and ready to go.

I closed up the unit and tested it on the table. The green status LED lit up and no smoke or funny smell was coming out of the SPS.

I went ahead and installed it back in the rack, leaving it to charge overnight.

Today i powered up the whole CX4, write cache is back 🙂 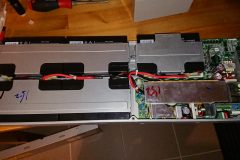 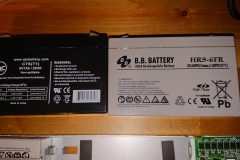 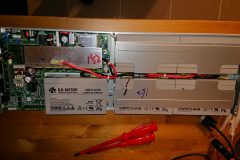 Hi,
thank you for your interest into this topic.
I did not have to recalibrate the SPS. As far as i know there is not even an option to do so. Simple matter of exchanging the batteries and plugging it back in.
The unit is still running fine up to this point 🙂
Hope that helps

Hi again! Big thanks for your reply! We actualy send our unts to our local client without 146% knowing, do we need to do this recalibration thing for sure XD
I guess now we can exhale a lil bit now 🙂 Big thanks again!

I just recieved an empty SPS with 4 battery cables and bought the new batteries. Looking at the posted pictures I cant figure it out how connect the new batteries chain properly. Could you explain it to me briefly?

unfortunately i do not remember the cabling 100%. Looking at the last of the three pictures i believe that a series wiring is the right way but no guarantees that that is actually the case.
I would have to open up my unit to be 100% sure which is something i can’t do in the next 6-8 weeks due to a knee injury (SPS is at the bottom of the rack…)
I am sorry that i can’t be of more help right now